[10266] [10267] [10268] Wife 1 : Julia Elizabeth Jessie IRVING
Children
Please email corrections or additions to Dale Schultz at
Personal details of people who may be living are NOT placed on the web

Family tradition: "Had a hotel built in Ladysmith - The Royal Hotel"
According to http://www.battlefieldsroute.co.za/place/the-royal-hotel/

In 1884, Clark was the proprieter:
A CHARGE OF MURDER: 1884
The Proprietor of the “Royal Hotel” in Ladysmith had fallen out one evening with his brother-in-law, Grubb. Grubb had interfered between Clark and his wife - Grubb’s sister – when quarrelling violently; this ended in Clark knifing Grubb, inflicting a wound in the abdomen penetrating into the bowel. Grubb collapsed, he was immediately carried down to the Chemist shop, Mr. Spettigue’s, where I was, where he was placed in a bed and a medical man Dr. Heath, sent for. He turned up the worse for liquor. Poor Grubb was suffering terrible agony, and a large portion of the bowel was protruding. The doctor called upon Mr. Spettigue to assist, and I also was assigned the work of administering the Anaesthetic. Electric light at that time was unknown. Candlelight they had to work by, and the Doctor fiddled about a long time in an endeavour to get the bowel back, but in this he utterly failed. Growing desperate, he enlarged the cut in the abdominal wall, and so got it back. By this time the bowel was in a deplorable state of filth, no antiseptics had been used. Needless to say Grubb died a couple of days later, and Clark was tried on a charge of murder. He was sentenced for Culpable Homicide and was given several years imprisonment.

The Royal was built ca 1878 and a liqour licence applied for in 1886 by Mr Hamilton the proprietor.

From Brian Kaighin:
The annual licensing reviews for the Royal Hotel for 1896, 1897, 1898 show that a William Arnold owned the Royal Hotel but with the next review on 24 July 1899 Charles Jones was the owner.

The disqualification of a member of a Local Board does not disqualify the whole Board or render invalid its acts
(Before Gallwey CJ Mason J and Fixnemore J)
WM Arnold was summoned in the Magistrate's Court for the Klip River Division for a contravention of Section 65 of Act 38 of 1896
The summons was as follows:
To CH Hendley Sergt NP Acting Messenger of the Court Summon Willam Marshall Arnold of Ladysmith Hotel and Bar Keeper that he personally appear before this Court at Ladysmith on the 21st October 1898 at 10 'o clock in the forenoon then to answer and abide the judgment of this Court upon the complaint and information of the Local Board of the township of Ladysmith that the said WM Arnold is guilty of the crime or offence of contravening Section 65 Act 38 1896 In that on or about the 15th October 1898 and at the Boyal Hotel premises in Murchison Street Ladysmith he being then the holder of a Hotel Bar License for the said premises for the sale of intoxicating liquor did wrongfully and unlawfully sell or keep his Bar or Buffet premises open for the sale of intoxicating liquors and did supply persons namely James Cairns of Ladysmith and Sergeant Lloyd of the Royal Irish Rifles with certain intoxicating liquors to be drunk on the aforesaid licensed premises between the hours of 11 'o clock at night and 6 'o clock in the morning the aforesaid persons not being sleeping or boarding on his hotel premises and to produce his liquor license and deliver the same to the Magistrate on the day of hearing

He was found guilty, appealed and had his appeals denied. 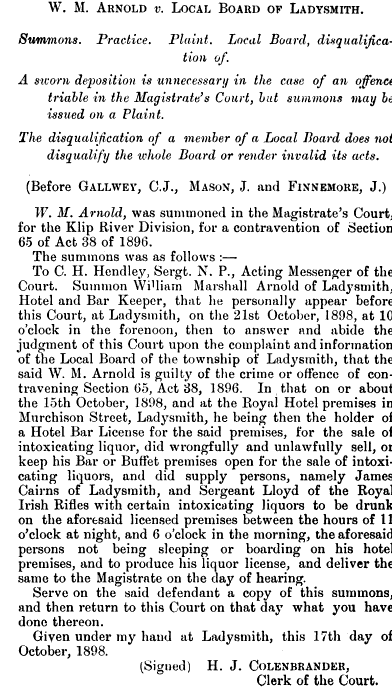 Family tradition: "He was there there during the Boer War but he left town during the war for some secret reason. Wife and children left behind to manage the hotel.
Sons Henry, Walter, Jack and Victor were all present at the hotel."

At https://www.angloboerwar.com/forum/5-medals-and-awards/26456-the-owner-of-the-royal-hotel-in-the-siege-of-ladysmith-c-j-jones
there is considerbale evidence that a Charles J Jones was the proprietor of the Royal Hotel in 1899 and 1902. He died in 1910

There is a postcard of the Ladysmith Hotel dated 1912 with greetings from Mr and Mrs W. M. Arnold. I suspect that Arnold owned the hotel but leased it out to Jones in a similar fashion to how his father leased the Trafalgar Hotel in Durban to people at various times.

After the Anglo-Boar war they all went to Barrow-in-Furniss, England.
Sons went to work at Vickers Shipbuilding yards (later known as Vickers-Armstrong).


After WW I, returned to Durban for some time. His brother, George wrote to him and suggested he come to Rhodesia so they went to stay with George and Annie on their farm.

Daughter Jessie stayed with his sister Julia Arnold in Durban.

Under the name Arnold Brothers, they bought 4 farms: Zintifuli, Kapiri and two others under a deal with the Rhodesian government for returning soldiers. Possible ~2000 acres each.

Did not feel well so went to see his friend Dr Hewittson in Sinoia who sentd him for tests in Salisbury. Tests revealed a stomach cancer diagnosis.

About a year later (1925) he said "I am going out to shoot for meat" and he shot himself in the orchard.

Sons Jack and Henry were at the farm, Victor was in India, Walter in Durban, South Africa.